The Principles of Humane Experimental Technique 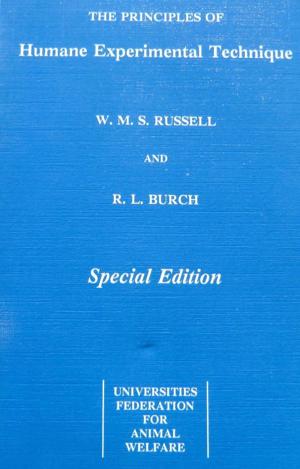 Universities Federation for Animal Welfare (UFAW) has re-issued this classic work which sets out the philosophy of the 3Rs; Refinement, Reduction and Replacement, regarding the use of animals in scientific experiments. This book, written by Russell and Burch, was first published by Methuen in 1959, but went out-of-print over 25 years ago. It sought to minimise the then increasing number of animals being used in medical and veterinary research. The 3Rs are widely used by all responsible scientists and one rarely reads or hears a discussion on laboratory animal welfare without reference to them. It is considered important that this original text, still relevant today, should be readily accessible for new generations of scientists.
This Special Edition from 1992 marks a tribute to the authors and is a timely recognition of the Russell and Burch Awards instituted by the Humane Society of the United States which recognises outstanding contributions to the advancement of alternatives to the use of animals in research, testing or education. Table of Contents: Part One, The Scope of Humane Technique; Foreword to Special Edition; Preface: Chapter 1: Introduction; Chapter 2: The Concept of Inhumanity; Chapter 3: The Ecology of Experimental Animals; Chapter 4: The Sources, Incidence, and Removal of Inhumanity; Part Two, The Progress of Humane Technique; Chapter 5: Replacement; Chapter 6: Reduction; Chapter 7: Refinement; Chapter 8: The Factors Governing Progress; Tables; References and Source Index; Addendum.

Comments & References: 238 pages. Special Edition. A revised and updated version called The Three Rs and the Humanity Criterion was published in 2009. The new version is shorter and the language is modernised to make it more up-to-date and easier to read. The new title is taken from the text of the original version and it is edited by Michael Balls. Please contact FRAME for more information.

The version from 1992 may be read online, free of charge.

Price:  It may be difficult to obtain a paper copy of this publication, because it is out-of-print.

Free of charge: online version from 1992

All articles from Universities Federation For Animal Welfare (UFAW)

This is one of our favourite textbooks within Laboratory Animal Science.
This page was updated on 06 October 2020