SPHERTOX was financed in 2021 by the Norwegian Research Council under their scheme for Researcher Projects for Young Talents. 55 of the 540 applications (10%) were granted funding. The full title of the project is:

Hepatic 3D spheroids: the next generation of testing in toxicology (SPHERTOX)

It is led by Research Scientist Dr. Maria T. Hultman at the Section for Ecotoxicology and Risk Assessment, Norwegian Institute for Water Research (NIVA).

The primary objective of SPHERTOX is to assess the performance of hepatic 3D spheroids from rainbow trout as an alternative chronic toxicity- and bioconcentration system, alone or in co-culture with other cell types, as an alternative and advanced in vitro model with increased comparability towards in vivo test systems.

The long-term goal of SPHERTOX is to develop a method applicable for regulatory purposes and international validation, which will significantly improve the hazard assessment of chemicals in regulatory programmes such as REACH.

To fulfil this objective, SPHERTOX will generate in silico and experimental data to develop and evaluate novel and alternative ecotoxicological test methods for fish, with the following main aims:

Development is underway for more physiologically relevant in vitro test systems that are more complex than single-cell models, and more alike the organ of interest (e.g. the liver). One such bioassay is the 3D organelle model, which consist of primary hepatic cells, or continuous cell lines, allowed to aggregate into 3D spheroids over a period of a few days. A viable 3D spheroid is 100-400 μm in diameter, consists of approx. 500-5000 cells per spheroid, and forms during 5-10 days of incubation.

Characterisation and evaluation of the 3D spheroids is necessary to unravel the assay's applicability as a novel in vitro model. Although 3D spheroids using hepatic primary cells have been developed, there is limited information on their characterisation and use in bioconcentration assessments, in particular for industrially relevant and slowly biotransformed hydrophobic chemicals, and there is no information on their use for chronic toxicity testing.

Co-cultures are highly relevant for toxicity testing and this will be investigated in combination with liver spheroids. Development and application of such systems will play a central role in research within synthetic biology and ecotoxicology, since they better reflect the gill-plasma-liver model in fish.

This project aims to develop a scientifically novel test paradigm that can replace, refine and reduce the use of fish in regulatory chemical hazard assessment.

Norecopa's Secretary is a member of the Scientific Advisory Committee (SAC) for the project. The SAC will facilitate expansion of the project's network within academia, industry and regulatory authorities, for dissemination, communication and exploitation of the data generated from the project. Members of the SAC include Dr. Adam Lillicrap, who was awarded Norecopa's 3R Prize in 2017 for his work in developing alternatives to animal tests in connection with monitoring of environmental hazards. 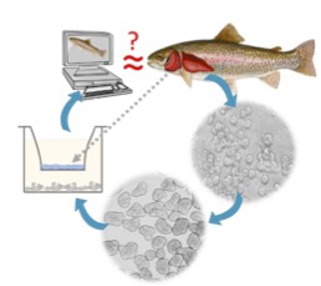