Hint: Type * to see everything on the website and then use the filters in the right margin
Current number of webpages: 8937

The PREPARE guidelines for planning animal research and testing contain links to many resources which can be used to improve applications for animal experiments and implement the 3Rs.

William Russell and Rex Burch developed the concept of the Three Rs during the 1950s, and described them in their book The Principles of Humane Experimental Technique (1959):

Many definitions of the three Rs have been developed since Russell and Burch first described them (see below), and some differ significantly from the original definitions (Tannenbaum & Bennett, 2015). Currently, they are generally understood as:

Replacement alternatives: methods which permit a given purpose to be achieved without conducting procedures on animals

In their book (chapter 7 on Refinement), Russell and Burch emphasised the order in which the three Rs should be addressed:

'Suppose, for a particular purpose, we cannot use replacing techniques. Suppose it is agreed that we shall be using every device of theory and practice to reduce to a minimum the number of animals we have to employ. It is at this point that refinement starts, and its object is simply to reduce to an absolute minimum the amount of distress imposed on those animals that are still used.'

Since the days of Russell and Burch, many new techniques have been developed which are not directly replacements for existing animal models, but which prevent animal use. These are referred to as New Approach Methodologies or Non Animal Methods (NAMs) and include cell cultures, computer simulations and organs-on-a-chip. This creates the need for scientists to adopt a new mindset: is it necessary to model the entire organism at once? In many cases it may be more than adequate to model just one body, tissue or cell system, using a NAM. If none of these meet the research objectives and the scientists is considering using an animal model, a search for animal replacements is then the next step.

There are now many 3R Centres in existence, working with both replacement, reduction and refinement methods. Norecopa maintains an interactive map of European 3R Centres.

Development of the 3R concept

According to Russell and Burch, the ultimate aim of the 3Rs was to abolish inhumanity (or distress), and thereby achieve humanity, which explains the title of their book. They distinguished between direct and contingent inhumanity. Direct inhumanity is 'the infliction of distress as an unavoidable consequence of the procedure employed, as such, even if it is conducted with perfect efficiency and completely freed of operations irrelevant to the object in view'. Contingent inhumanity (usually referred to today as contingent suffering) is 'the infliction of distress as an incidental and inadvertent by-product of the use of the procedure, which is not necessary for its success'. Examples of contingent inhumanity are poor housing and handling.

Russell & Burch wrote:
The greatest scientific achievements have always been the most humane and the most aesthetically attractive, conveying that sense of beauty and elegance which is the essence of science at its most successful.

Russell and Burch's definitions were:

Reduction means reduction in the numbers of animals used to obtain information of a given amount or precision.

Refinement means any decrease in the incidence or severity of inhumane procedures applied to those animals which still have to be used'.

Their definition of Replacement, in particular, is very different to that held by many people today, who consider replacement to be the use of non-animal material. For example, according to Russell and Burch's definition, an acute experiment (i.e. an experiment performed on a totally anaesthetised animal which is killed under the anaesthetic at the end of the experiment) is a Replacement method.

The UK organisation NC3Rs has re-defined the standard 3R definitions so that they are more reflective of contemporary scientific practice and developments. They have also created a checklist of 7 points which institutions should adopt or consider in order to establish an institutional framework for the 3Rs. They have also produced a introductory video for training purposes, and written a blog to explain their rationale behind the need to take a fresh look at the concept.

Development of interest in the 3Rs

The evolution of the Three Rs tenet has been described in detail (Balls, 1996, 2007, 2009; 2014; Balls et al., 1995; Russell, 2005). The concept was developed as part of a project initiated by the Universities Federation for Animal Welfare (UFAW) in 1954, consisting of interviews with researchers about animal research, with the aim of improving upon the routines of the day. The word ”alternatives” was deliberately not used in the invitation, to avoid the risk of researchers declining to participate, which instead described ’a review of progress in the development of humane techniques”.

The project resulted in publication of Russell and Burch’s book The Principles of Humane Experimental Technique in 1959 (Russell & Burch, 1959). Little happened after this until the Fund for the Replacement of Animals in Medical Experiments (FRAME) was established 10 years later, which despite its name was founded to promote all three Rs. The 3Rs were collectively described as ”alternatives” by D.H. Smyth in his book Alternatives to Animal Experiments (Smyth, 1978), at which time it was felt that methods to replace animals were still in their infancy.

The first major effort to bring focus to bear on 3R alternatives after this was a world congress on animal use and alternatives which was arranged in Baltimore in November 1993, at which William Russell spoke (Russell, 1995). This became the first of a series of world congresses which are now arranged every 3 years. After 1959, Russell and Burch did not meet again until 1995, when a workshop was arranged at Sheringham, where 58 proposals to strengthen alternatives to animal experiments were made (Balls et al., 1995).

The November 2005 issue of Animal Welfare was dedicated to the three R's and included:
The use of databases, information centres and guidelines when planning research that may involve animals. Smith AJ & Allen T (2005): Animal Welfare 14:347-359

Recording of a lecture on 22 November 2019 by Professor Michael Balls entitled On the Replacement of Animal Testing: Yesterday, Today, and Tomorrow which gives a detailed history of the development of the 3R tenet.

By "alternatives" Norecopa means all the "three Rs" (Replacement, Reduction and Refinement) of Russell and Burch.

Norecopa maintains a database of 3R resources, 3R Guide, which is integrated in the Norecopa website.

An overview of 3R centres can be accessed here.
Several organisations, including Norecopa, award a 3R Prize.

The Declaration of Bologna

In 1999, 40 years after the publication of Russell & Burch's book, the participants at the 3rd World Congress on Alternatives and Animal Use in the Life Sciences endorsed the principle of the Three Rs in the form of the Declaration of Bologna (published with permission from the journal ATLA, Alternatives to Laboratory Animals):

More resources about the 3Rs

Dissemination of resources on how to implement the 3Rs should be one of the pillars of all scientist's work: 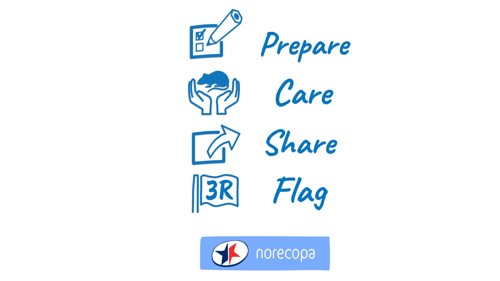