There are submenus under all the headings above
Current number of pages: 9384

Provide as much information as possible about test substances.

Characterisation of test substances (e.g. chemicals) is generally easier than characterisation of the test system (e.g. cells, tissues, organs, animals) to which they are applied, with some exceptions such as early candidate molecules in pharmaceutical research. As much information as possible should be provided to the animal facility.

The feasibility of studies involving new surgical procedures, or of recruiting researchers new to the use of established procedures on animals, must be established before animals are committed to such projects. The technical skills of those to be involved are of critical importance and must be established beyond the standards assumed upon completion of theory-based training programmes and familiarity with the related literature. Technical aptitude is best acquired by direct collaboration of the new researcher with individuals possessing such skills in the intended species. Where such individuals are not available, “dry-runs” using cadavers should be considered. If legislation does not forbid them, the use of acute experiments (where the animal is humanely killed by an anaesthetic overdose while still unconscious) as pilot studies may also be discussed. It should not be assumed that researchers adept in complex procedures in one species, for example humans, are similarly adept on others, such as pigs. 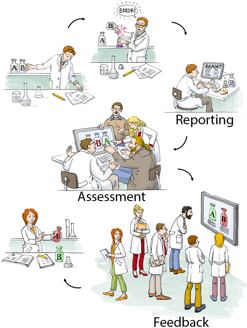